The Giza Pyramid and Root Numbers

Disclaimer: Please note that my perspective is aesthetic inspiration, practicality and real life theoretical implications rather than mathematical.

Did the Egyptians know the division of surfaces according to what is popularly known as the golden ratio?

I stumbled across some old notes of mine from 1995 where I had done an analysis of the Giza Pyramid from a root rectangle perspective. Pretty soon I found that the angles and proportions was very closely related to the "extreme mean ratio" on every angle and corner. At that time, I could not believe that the measurements lined up so well, so I put them away. When I revisited these notes I found that the numbers really do line up quite well.

I will try to show these relations in a way where it will be difficult (at least for me) not to suspect that the Egyptians did know how to calculate the division of surfaces according to what is known as the "Golden ratio", or better described as root numbers. Not by a simple 3:4:5 triangle but a deeper knowledge about geometry, possibly even trigonometry. Not only that, it looks like they build the pyramid on a very strict formula around the "Golden ratio" formula. I'm not saying they where using calculators (as I do). All that is needed in what I'm about to show is sticks and strings. That is how root rectangles can be built (read more about it further down, or in my article "A Closer Look at Root Rectangles").

If we look at the well known 3:4:5 triangle, and the reason why I do not think it was the only tool the Egyptians had access to.

The 3:4:5 triangle is a great tool for creating 90° angles. It can be confused for looking very similar to the flipped cross-section of the pyramid. What I have done here is to convert the numbers according to a root rectangle perspective to make the comparison more clear.

In figure 2 we see a similar, but very different triangle. The dimensions of the square shapes is not nice and even regular numbers any more. But what caught my attention is that it matches the dimensions of the cross-section of the pyramid much better than the 3:4:5 triangle.

What I found is not new and has been known by other people. It has been debated and disputed, argued back and fourth, whether they used the 1:0.618 / 1:1.618 formula deliberately or by chance. The purpose of this article is not to try to prove anything right or wrong. Look at it more like an experiment to see if it is possible that it could have been done in this way.

I want to be very clear that I'm not trying to show or state that they did this for a "divine", "alien intelligence" or "cosmic knowledge" reason. I don't know why the numbers or angles line up as well as the do but I will try to show this from a root rectangle perspective.

I'm not a mathematician myself and I don't think you need to be one in order to calculate these angles and relationships I'm illustrating. Root numbers is the simplest way to divide surfaces into components and relationships that is scalable, and where each surface relates, in proportions, in area and in line divisions to the other elements in the same 3 dimensional shape.

Let's start with the measurements. This is what I have found in different literature and on the web.

The hypotenuse of the cross-section relates to the base width/2 with a ratio of 0.618.

If we simplify the number and set the base width of the pyramid to 2 units some interesting numbers comes up. Anyone familiar with the "golden cut" recognizes the number 0.168. Have a look at this:

In this example the cross-section is flipped on the side for the sole purpose of readability when inscribed in a "Unit circle". The unit refers to the hypotenuse and this is always 1. With numbers we know this will be:

What I'm trying to show is this number 0.618, so please bare with me. I will try to explain this in greater detail further on.

Have a look at this:

Why these decimal numbers? It is irrational! The Egyptians did not have calculators the same we do. The reason I am using numbers is to see if the geometry checks out. The thing is, a calculator is not a very good tool for this. A better way is to use pen, paper, needles and a piece of string. As stated earlier, all this can be done with sticks and strings. Let me try to tell you how.

Take a look at this image

Forget about calculations for a while. Let us say we make a straight line using a string between two marks. Let this be the unit 1 (it can be any length) and this will be the starting point for for the rest of the layout. Then create a right angled square. Use the diagonal to draw an arch so that it hits the base line. The newly formed rectangle has a ratio of 1:√2. By repeating the same procedure we have a new rectangle with the ratio of 1:√3 and so on. Think about this: You don't have to know anything about Pythagoras or any other theorem to be able to do this. It is just a very practical way of working with surface layouts and surface divisions. I am showing this with numbers and symbols but you can put those away as well. It will still work with using just sticks and strings. We are working with areas (surfaces) rather than numbers here. This is how root rectangles can be understood in the most simplistic way. It is dealing with surfaces (areas) rather than straight lines. And this is also one of the reasons why the proportions usually don't come up nice and even as integers. Root numbers often produce irrational numbers.

If you want to learn more about this, read the "A Closer Look at Root Rectangles" article and have a look at this interactive proof of the Pythagorean theorem.

Let us continue with the same rectangle for a while and see what happens.

We have used the diagonal from the √3 rectangle, created a √4 rectangle (same as 1+1) and have finally created a √5 rectangle.

If you understand what root rectangles are by now, take a look at this:

Here are these numbers again!

The interesting thing about this irrational number 0.618 and 1.618 is that the unit 1 relates to 0.618 as 1.618 to 1. In ancient Greece this ratio was called "phi" or "φ". This ratio was also know as dividing a line in the extreme and mean ratio. In more general terms this ratio is also known as the "golden mean", "golden ratio", "golden section", golden cut", "golden number, "divine proportion", … Read more about it here under the section "A closer look at 1:√5".

A Closer Look At The Sections

Let us unfold the pyramid. What you see in the image below is a cross cut of the Giza pyramid. If you have a decent browser, meaning updated versions of Firefox, Chrome or Safari (older versions of Internet Explorer will not work), you can check this interactive 3D model in WebGL, visually describing my theories about the Giza Pyramids layout. 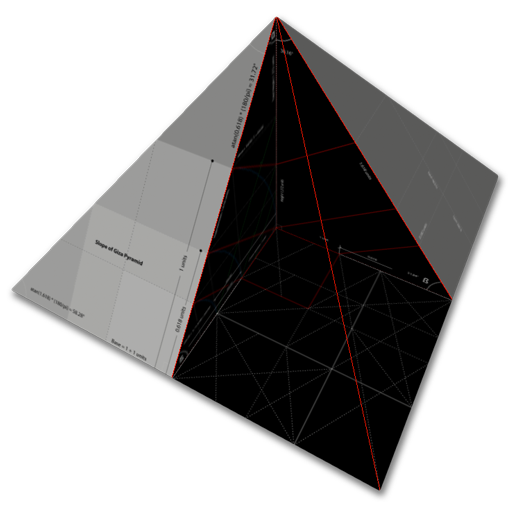 The black triangle is the cross-section of the pyramid and the hypotenuse in the blue square is the slope.

Please note that this is the slope, not the cross-section. The 1 unit represents 220 cubits.

A Closer Look at Root Rectangles

Proof of the Pythagorean theorem

The Flagellation of Christ